Getting Sick on the Road + the People Who Help Us


If you've done any amount of traveling, there's a good chance that you've probably also been sick on the road.


It can be truly miserable and sometimes even a little scary: you're far from home, maybe you're by yourself or you don't speak the language, you were supposed to check out an hour ago and you can't even sit up in bed – the obstacles can seem insurmountable when you're sick.

But, I've also discovered that, sometimes, when we're our most vulnerable in our travels is also when perfect strangers can be the most wonderful, kind, and generous people we will ever encounter.


I was thinking about being sick on the road this week because of what one of my best friends, Christy, went through a few days ago. This amazing, smart, and inspirational friend is also an oncology travel nurse. And, as the job title suggests, she travels a lot. All her worldly possessions fit into a few oversized bags, and every three or four months she packs her stuff, herself, and her sweet little kitty into her old pick-up truck and moves to a new city. Needless to say, she's a total pro and has got packing and traveling down to a science.


Christy's also a warrior and as strong as they come, but she was absolutely knocked down earlier this week as she started off on a cross country move from Virginia to California. The very first day of her roadtrip she got horribly ill. Think pulled over on the side of the highway and getting sick in the bushes.


It took her forever to get to her destination that day, but hours later than planned and much to her own amazement, Christy pulled into her Airbnb in Georgia and her kind host was waiting for her. The host had specially laid out all of the bathroom linens on her bed and had left water and some light snacks on a table in the corner. Knowing that the room was already booked for the next night, the host also contacted the next guests to find out when they'd be arriving, and then told Christy she could sleep in and didn't need to leave until 4 the next day. Her host also offered to make her juice, toast, or anything else she needed. Christy did accept the extra strength ibuprofen and then collapsed for the night into what she described as the best bed ever.


Fortunately, the next morning Christy was feeling better – completely wiped out, but better. Her host told her to shower and when Christy got out, there was hot tea waiting for her. Later the host gave her a little meal of a muffin, some toast, and a banana. And, the part of the story that just completely charmed me, was that her host sent her off with a little doggie bag of snacks for her drive that day.


When she told me this story the other day, Christy said, “I was so lucky that happened to be the place I stayed.”


I hate that my bestie had to experience such a terrible illness while she was traveling, but I love that there was a silver lining and that we get to see just how kind and caring strangers can be.


And, since I have a special knack for getting sick while traveling, I also have my own stories of wonderful hosts being so helpful and kind to me. Countless hosts have given me directions to the closest pharmacy and helpfully written down my symptoms in the local language so that I could explain to the pharmacist what kind of sick I was. (I could write a whole other story on how great pharmacies are around the world, and how funny it can be to try and pantomime questions and answers about being sick!) 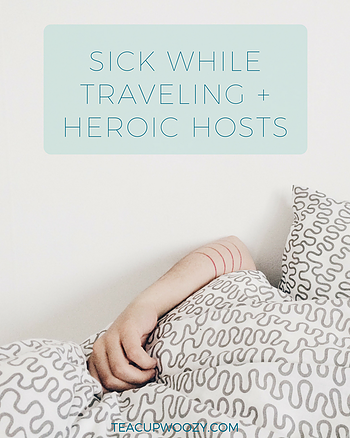 The first time I got sick while traveling was about a week into an open-ended backpacking trip across Europe. I had just arrived in Dublin, Ireland where I was staying in a dorm room at a hostel. I went to bed feeling a little funny, but blamed it on still being jet-lagged and in a daze from the previous week spent in London. The next morning I woke up with one of the worst flus I've ever experienced. The worst of it being a fever so high that I was hallucinating.


Someone in my dorm room must have told the staff that I was unwell because a young women who worked there came up to check on me. I don't remember the conversation very well, but after a couple more visits over the day, she helped usher me and my bag into a private room with an en suite bathroom. At some point someone also brought me medicine. I stayed in that room for two nights and three days without leaving. The staff checked in on me a couple times a day and brought me crackers, lemon lime soda, and water. In addition to their kindness, the incredible part of this whole story is that – recognizing that I was a backpacker on a budget – they only charged me the price of a dorm room bed for all the nights I stayed in that private room. Total generosity.


Yes, being sick while traveling can be really unpleasant. But it also shows us how generous and kind our hosts can be. Do you have a story of someone helping you out while you were on the road? I'd love to hear about it! Tag me on social media or drop me an email.